The different Types of Guitar 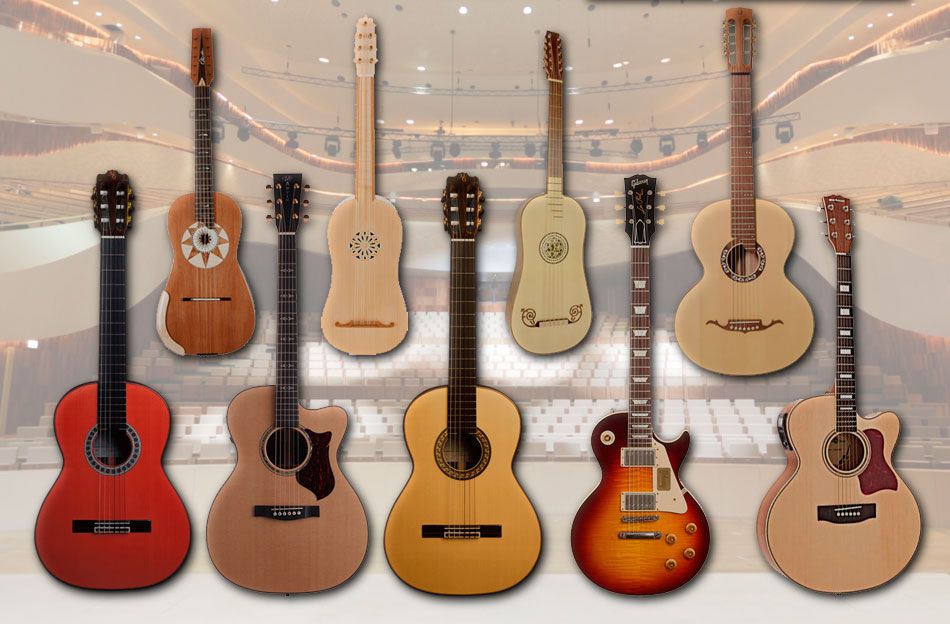 The guitar is an instrument used around the world, and depending on the place, they have created their unique style. Therefore, there are many more modalities than we are going to tell you here. Likewise, there are many types of guitar in the world.

The types of guitar that exist are variations of the classical guitar with evident modifications. However, they only differ in their structure, which leads to modifying their sound and composition; These are generally made of wood with six strings that can be nylon or metal. 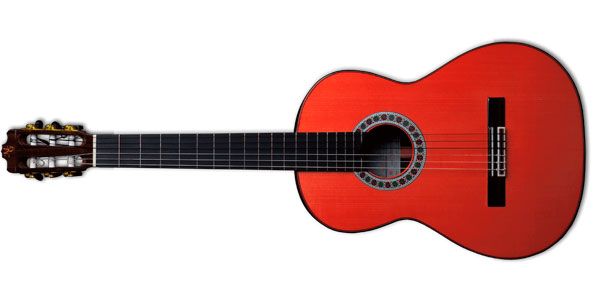 Classical guitars, Spanish guitars, or Creole guitars are the same. The only thing that changes is the name according to the region or country where it is used. It has a group of wound metal strings and nylon strings that produce a natural and sweet sound. Other types of guitars have a fretboard that is flatter, wider and has no curvature.

This classical guitar has six strings and a wider neck. Its main parts must be made of fine wood to have a quality sound. Wood such as cedar or ebony is the right option to elaborate the fingerboard, the neck, and the bridge.

Academic music concerts included guitars of this type; they are perfect for interpreting musical genres such as flamenco, South American folklore, or classical musical repertoire.

Characteristics of the classical, Spanish, or Creole guitar

The main characteristics of the classical guitar are that it has six tuned strings. In addition, the resonance box is flat and shaped like an eight; it has an opening or a soundhole located in the soundboard.

This type of guitar has a neck composed of a fretboard with nineteen metal frets and a headstock where we can regulate and tune the strings by modifying the tension with the pegs.

Today, the guitars have a higher tension in the strings because the force that pulls them through the peg is between six and seven kilograms. 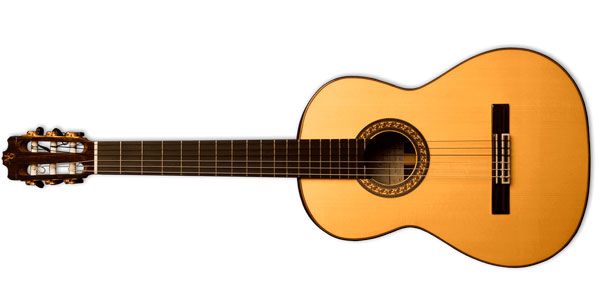 The Flamenco guitar is a variant of the Spanish guitar, with characteristics that differentiate it from the Spanish guitar, both in its external appearance and sound. For example, it is significantly smaller, and its side rings and harmonic bars have a different placement.

The music produced by the flamenco guitar is very different from that interpreted with the rest of the guitars, making its use essential for playing Spanish music.

The Flamenco guitar has a slightly narrower body than the classical or Spanish guitar, so its execution is much more comfortable and faster; the strings are somewhat closer to the fretboard, which means that the guitarist has to put less pressure on the fretboard.

The Flamenco guitar is constructed with rosewood, cypress, or sycamore applied on the back and sides; The use of German spruce for the top is more prevalent, but selecting a type of wood will depend on the guitarist, as these have different colors and appearances with a great variety of shades.

The rosette of this type of guitar has a protective layer placed above or below it. In addition, it protects the wood from the hits and strums that are so frequent in flamenco music.

The sound of the flamenco guitar has a series of unique characteristics, as it is less loud and the volume is lower than the Spanish or classical guitar. Still, the sound it produces is brighter and more percussive, and for these reasons, it is very adaptable to the flamenco genre.

Do you want to know how to choose the right string for your guitar? 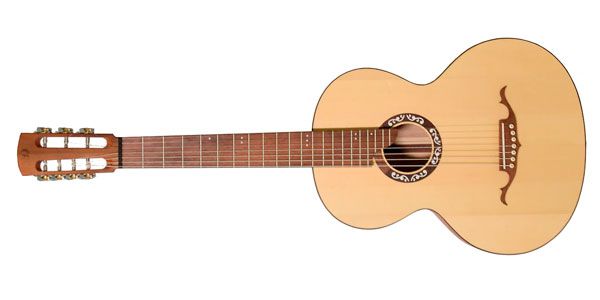 The Russian guitar, sometimes called the “gypsy guitar,” is a seven-string guitar developed in Russia in the late 18th century. It is a stringed instrument created by Andrei Sichra, who wrote more than a thousand compositions for this guitar.

This type of guitar has similarities to the Spanish six-string guitar, it is not the same, but its most significant difference is the seventh string. There are two types, the classical guitar, more similar to the Spanish, and the gypsy guitar with steel strings more identical to the acoustic guitar. 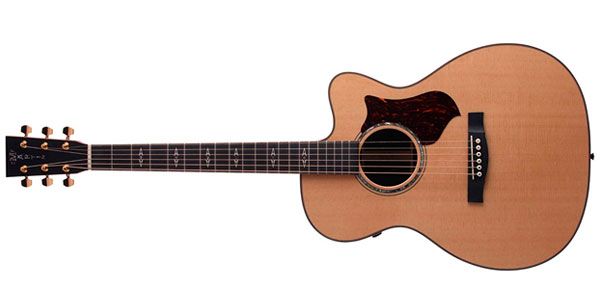 The Acoustic guitar was created in the 19th century by American musical instrument manufacturers known as Western Guitars because it does not require a sound amplifier for its execution.

This type of guitar is a musical instrument with well-tuned strings; It has a resonance box to amplify the sound produced by the strings’ vibration. It is the classic model of the modern guitar most widely used instrument in the world.

It is a very versatile type of guitar and adapts to a wide variety of musical genres. It can play Blues, Pop, Jazz, and Rock; It has a much more comprehensive range than the classical guitar; it is also easier to play because it has a thinner neck, allowing greater comfort.

This musical instrument includes the following parts: a pegbox or headstock, fretboard, neck, and a bridge where the strings are.

We can say it is the ideal guitar to pluck several single notes. It also works great when playing different chords. In addition, the sounds it produces are natural and do not require sound amplification using electrical technologies.

It has metal strings, producing a complex and brighter sound than those of a standard guitar. In addition, they have a higher tension than the nylon ones and are closer to each other. The fretboard measurement is approximately 40mm, and the acoustic guitar has the largest body.

For the acoustic guitar to emit a quality sound, it requires good quality wood such as cedar since this helps to have different types of tones. Use cedar for the top of the soundboard, rosewood, mahogany, and maple on the sides and back.

There are several types of acoustic guitars: 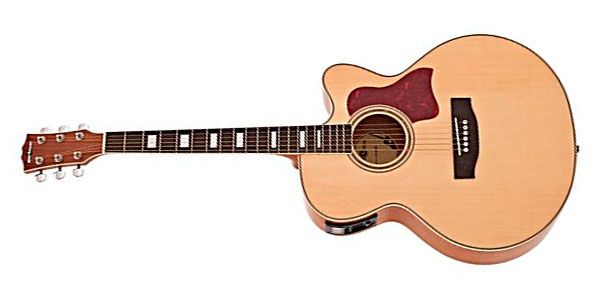 Electro-Acoustic guitars, or electrified guitars, have an installed microphone connected to PA systems or amplifiers to make it sound louder; it uses piezoelectric transducers, which create a sharper, more natural sound. 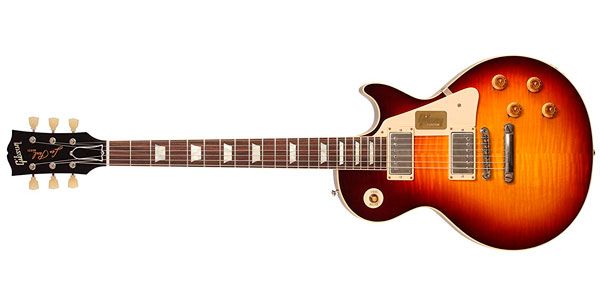 The electric guitar is an electrophone musical instrument with metal strings. One or more electromagnetic transducers called pickups transform the strings’ vibrations into electrical signals to be processed and amplified.

The Electric guitar body is made of mahogany, oak, linden, alder, or ash wood, although synthetic materials, such as plastic, polycarbonate, or aluminum alloys, are sometimes used.

On the inside of the Electric guitar, we can find the electronic components that are semi-solid, with a small resonance box; The density of the wood used in construction influences how long a note remains sustained after the musician plays the string.

There are different types of bridges. Each one has other characteristics that influence the guitar’s sound, including piezoelectric pickups that allow you to capture the strings’ vibration, vary the tension, and produce a rocking effect in the intonation.

The fretboard contains the same wood used in the neck.
African rosewood or ebony is usually the chosen material for it. It is a piece of wood glued to the neck. The frets are small metal bars traditionally made of steel and located above the fretboard and perpendicular to the strings. The frets get in contact with the string when the musician presses it to play a note.

The headstock or pegbox is in the upper part of the neck. It is the part where the strings are wound to some metal pieces with a cylindrical shape; They have an endless screw that regulates the tuning and the string’s tension. 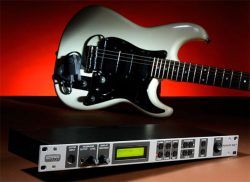 The MIDI guitar is a guitar connected to a MIDI system. Its design is for guitarists who do not know or do not want to play a keyboard but want to take advantage of all the MIDI system benefits. It works as an adapter that allows you to control a type of MIDI synthesizer with the many benefits that come along.

With the MIDI system, a musician doesn’t need to know how to play some instruments; arrangements with this system can be generated automatically.

Other types of guitars 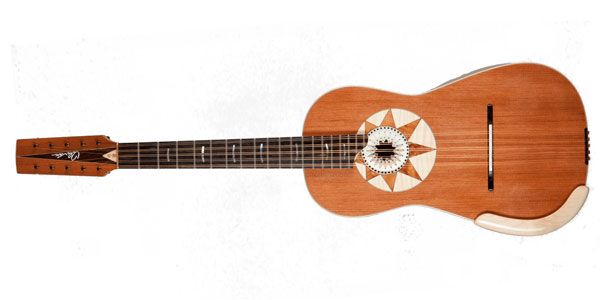 The Italian guitar or Chitarra battente was created in the 14th century very popular among troubadours and minstrels. It is traditional in southern Italy, specifically in regions such as Basilicata, Campania, Calabria, Abruzzo, Puglia, and Molise. Its main feature is its elongated eight shape. 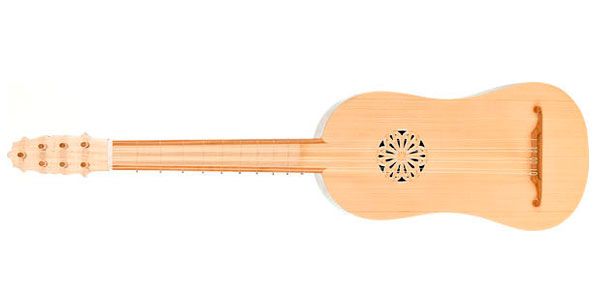 The Renaissance guitar was a trendy instrument like the vihuela; used to accompany dances, singing, and music in tablature. It had four orders, a single and the other doubles, which could be tuned in octaves or unison. This type of guitar had fewer strings and was smaller. 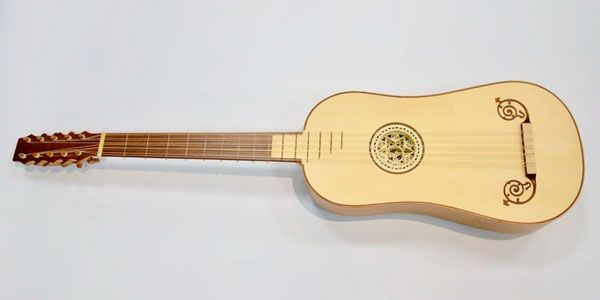 The baroque guitar belonged to the same era as the Renaissance guitar; its shape is similar to today’s classical guitar, only slightly smaller; the frets were located at the same level as the top, with an additional order added to the bass register.

The baroque guitar has a very ornated soundhole and body.

I hope you liked this article, and it brought you closer to the guitar world.

Guitar strings. What type of string is best and how to choose it
November 10, 2019

RECENT ARTICLES
Subscribe to my newsletter
Join more than 1000 people and receive exclusive content about the world of the guitar, directly to your inbox

Subscribe to my newsletter
Join more than 1000 people and receive exclusive content about the world of the guitar, directly to your inbox

This website uses cookies to improve your experience while you navigate through the website. Out of these cookies, the cookies that are categorized as necessary are stored on your browser as they are essential for the working of basic functionalities of the website. We also use third-party cookies that help us analyze and understand how you use this website. These cookies will be stored in your browser only with your consent. You also have the option to opt-out of these cookies. But opting out of some of these cookies may have an effect on your browsing experience.
Necessary Siempre activado
Necessary cookies are absolutely essential for the website to function properly. This category only includes cookies that ensures basic functionalities and security features of the website. These cookies do not store any personal information.
Non-necessary
Any cookies that may not be particularly necessary for the website to function and is used specifically to collect user personal data via analytics, ads, other embedded contents are termed as non-necessary cookies. It is mandatory to procure user consent prior to running these cookies on your website.
GUARDAR Y ACEPTAR
Abrir chat
1
¿Necesitas ayuda?
Hola,
¿En qué podemos ayudarte?